7. CAN FOOD DANGEROUS UNDER AGE 6 MONTHS

8. DONT VACCINATE IF PUPPY HAS DIARRHEA

Our sizes are all smaller then commonly found online
The biggest one below grew to only 4 lbs  7 inches length and the Extra small  3 lbs 6 in.. 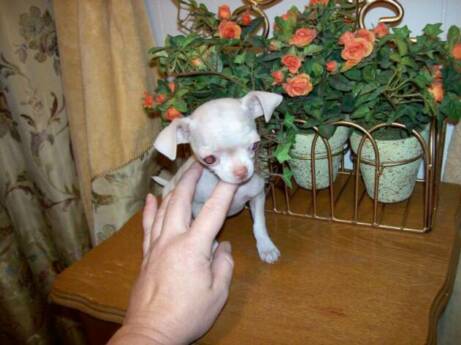 Stress – Stress is a major problem because a stressful puppy may
choose not to eat. This is usually brought on when a puppy enters a new home or new environment of some kind for the first time. The unfamiliarity can make them anxious, or nervous, and so they get the urge not to eat, leading to low blood sugar.

Illness – My Chihuahua puppies are healthy and strong. While that’s mostly due to the high standards I have for the care of my dogs, not all dog breeders share these same quality standards. As a result poor living conditions and maintained mother dogs, irresponsible breeders often produce sickly puppies that are more prone to hypoglycemia.

Hypothermia – A puppy can become hypothermic if their body temperature is lowered from shock or chilling or illness. This has potential to happen during winter time, where the temperature inside your home can become dangerously low for a puppy without a heating pad. A cold puppy will start to shiver in an attempt to get warm, rapidly burning through calories. In time, the body temperature will lower, sugar levels drop, and hypoglycemia sets in. So keep your puppy warm in winter time

5. What is the first sign of illness in a puppy?
Going off feeds is the first sign of trouble. Head right away to the Vet for a fecal check. EXAMINE THAT POOP! If you have solid hard poops and puppy is eating and playing then you are most likely fine. If you see loose stools and puppy is playing then time for a Vet trip and a check of the feces. It is vital to check your puppies stool at the first sign of illness. Worms, Parasites and bacteria ….. food poisoning bacteria …..can cause illness.
6.Why Canned Food Is Dangerous!
Warning: Do not use canned dog or puppy foods to feed your puppy. It’s extremely dangerous for tiny puppies. Canned food means any and all soft dogs foods, in the plastic containers and foil pouches. Although bacteria are killed during the canning process, the “toxic poop” made by the bacteria remain. Canned dog and puppy food contain endotoxins from bacteria. High heat is used in the canning process to kill bacteria, but this does not destroy endotoxins ( the poop of bacteria).
7. Never Give Vaccine To
Puppy With Diarrhea, especially Parvo vaccine
The parvo vaccine works by the vaccine lodging in the intestines and stimulating protection in the intestinal lining. If the intestinal lining is inflamed with sores from worms, or parasites, the Parvo vaccine and immune system are unable to work together, with tragic results. A modified live Parvo vaccine may induce a parvo like illness. Informed Vets now call this ” Vaccine induced Parvo”.
9. Vaccinosis Can Kill
Young puppies have immature immune systems and their immune system can become disrupted when hit with several disease at the same time. (vaccines simulate disease as I mentioned earlier ) How often in nature would any animal get hit with more then one disease at the same time? Never. Studies have shown that multiple vaccines given at the same time in puppies under 10 weeks confuse the immune system so that it is unable to produce proper titer levels of protection. Vaccines simulate disease when put into the body. The immune system must respond in a specific way against the disease the vaccine simulated, in order to produce antibodies. According to Dr. Pitcairn, vaccines intended to protect pets against acute natural diseases actually create chronic conditions with features of the disease the vaccine was supposed to prevent. Vaccines contain a number of toxic substances, including viruses, mutated bacteria, immune irritants, foreign proteins, and preservatives.

10. Rabies vaccine. Wait til Over 7 months.  Give by itself
I have received emails every year from families who wished they had seen my warnings first. Their puppies or adult dogs died following a rabies vaccine that their Vet had given right along with the yearly booster vaccines. I have lectured on my site for years to never permit a Vet to throw in the rabies shot along with the booster. Rabies should be given by itself and not with any other vaccines. My theory is that Distemper is a neuro disease and so is rabies and the combination of these vaccines  together somehow  can produce paralysis and death in susceptible dogs. There is also the possibility that the additives put in the rabies are causing the danger. Rabies is a killed vaccine and Veterinarians will tell you it is Harmless so Veterinarians must not know that a chemical is added to the vaccine , forcing the immune system to take notice of the rabies vaccine. Our immune systems would not pay attention to harmless injections and would not build immunity. In order for the immune system to “see” this killed “harmless” rabies vaccine , a irritant or toxic additive has to be mixed in with the vaccine to cause the bodies immune system to alarm and respond.

Soft spot on top of head , usually smaller then a nickle, similar to the fontanel newborn human babies have. In the past, this molera was accepted as a mark of purity in the breed, and it still is. It is mentioned in Chihuahua breed standards the world over.It’s presence is normal in this breed and not to become alarmed over.

Unfortunately, many lay people and some ignorant veterinarians not familiar with the Chihuahua have tried to link the mere presence of  a molera with brain defects and scare chihuahua owners . Imagine if human doctors did that to the parents regarding human babie’s  soft  spots . Some Incompetent Vets will say the puppy has a “hole in its head” and needs a neurologist immediately! This uneducated stupid advise is deserving of a dunce hat award. If your Vet is so unfamiliar with Chihuahuas as to not know about Moleras then  switch to a smarter Vet.  Ignorant hurtful remarks scare owners causing unnecessary  distress. If your puppy has a larger molera then prevent the puppy from going under the bed or under wood furniture because if they hit the top of the head where the soft spot is they can cause injury. The area if the soft spot in infants and in chihuahuas does not have hard skull cover to protect the brain until the skull plates fuse. The closing of the molera usually happens by one year old in chihuahuas.

Call Us About our Puppies

The finest Chihuahua puppies you can find!